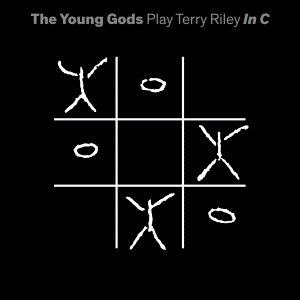 The Young Gods are publishing a new record with Two Gentlemen, ‘Play Terry Riley In C’. Needless to say this is a fertile meeting between two monuments who have helped shape the cutting-edge music of the last few decades. Terry Riley, born in 1935, is the cornerstone on which a considerable number of artists have relied to liberate their relationship to the process and methods of creation. In the same way, The Young Gods revolutionised, from the second half of the 1980s, their relationship with rock music by converting guitars into samplers. The dialogue between these two pioneers underpins a particularly fiery record.

Composed and premiered in 1964, In C is a major piece in the contemporary music repertoire of the second half of the 20th century, and a pivotal moment in its history. In C is innovative in several respects – first of all in its structure: its score is reduced to 53 musical phrases, which each musician must repeat in the order in which they appear, as many times as he or she wishes; the instrumentarium is not specified; the impetus for the performance is not given (vertically) by an orchestral direction, but (horizontally) by the musicians listening to one another. The result is a perfectly open work, constructed in a participatory manner by all the performers. This particular structure influences the musical nature of the piece: In C (and this is another of its revolutionary characteristics) was the first work to offer a successful synthesis of repetition and variation. To immerse oneself in it is to experience a pulsation, a swirling fabric of sound, but different with each completed orbit.

The Young Gods first approached In C in 2019 at the invitation of Benedikt Hayoz, director of the Landwehr wind orchestra in Freiburg – this resulted in a performance of the work with 85 musicians. Other approaches were made with Ensemble Batida, a Geneva-based contemporary music collective, with the dance company Alias, and with the documentary filmmaker Peter Mettler, for his film Petropolis. In this album The Young Gods offer a new interpretation of In C, as a trio and with their own sound vocabulary – electronic instruments, drums, and guitars. They have chosen to follow the score and Terry Riley’s indications, while allowing for some additional freedom, for example in terms of managing the sound intensity – which evolves, in several long cycles, from almost silence to eruption and back again. They have also chosen to maintain a constant tempo throughout the live performance by building up a hypnotic flow and a continuous musical presence that meanders and oscillates in perpetually changing rings and atmospheres that transform in a perfectly fluid manner. From the very first minute, ‘Play Terry Riley In C’ sets up a pulse that frames the whole performance. Bony clicks, deep bass lines, hi-hats, guitars, ternary motifs are the many layers that appear one after the other, superimposed, intertwined, interweaving to build a flow that carries you away and does not let you go. One might see in it the evocation of a progressive awakening – an awareness of the arrangement of possibilities. But this is only the beginning. By developing through a series of crescendos and decrescendos, by playing on the repeated addition and removal of musical phrases, by working sensitively on the sound quality (timbre, grain, alterations) of its elements, the piece aligns a series of ascents, ecstatic plateaus and lulls that give the work as a whole all the characteristics of a living form. And this beast has a particularly sharp metabolism: it roars, flies, bites, embraces you, and opens your mind. Above all, it grooves without stopping in a state of flux. The motto of ‘Play Terry Riley In C’ is to play and listen to each other; it is also to offer a series of challenges, questions, and musical ‘maybes’ that are articulated into a coherent beauty. Or, to put it in the words of The Young Gods, ‘to set the conditions for music to exist’.