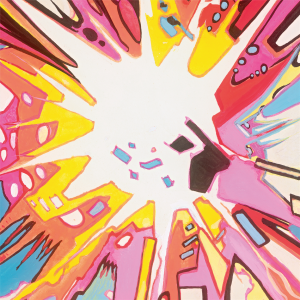 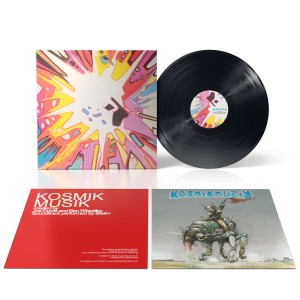 Two years in the making Kosmik Musik is a collaboration between artist Joe Currie, writer Ben Wheatley and musical group Beak>, who worked closely with the artists to provide a musical accompaniment for the graphic novel.

The soundtrack is pressed on 10" black vinyl and housed in a spined sleeve.

Ben and Joe met at art school in the 90s where they both were involved in a lot of comic book drawing and reading. It’s taken thirty years to finally get their acts together and create this book. In the meantime Joe has been sculpting and painting. Ben has been writing and directing films.

ABOUT KOSMIK MUSIK, THE GRAPHIC NOVEL: The galaxy is a big place–but not big enough for Mick and Eve as they are chased across it by cops, inter-dimensional plunderers, rogue artificial intelligences, middle-aged assassins and a third-tier superhero team. Come with us on a rip roaring, planet hopping adventure. Punches will be thrown, tears will be shed and music will be played on vinyl on vintage record players as Mick and Eve try to solve every sentient creature’s fundamental questions like why and what... and eh? Yes, dear reader, Kosmik Musik will unlock some of the more pressing mysteries of the universe. True Fact.