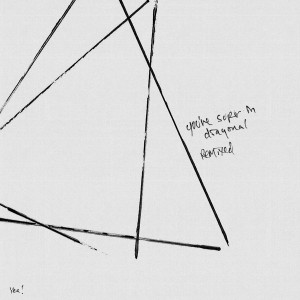 This EP is more than your usual remix package - "Remixed" is a meeting of kindred, idiosyncratic spirits. Ricardo Villalobos, Ada, and Tolouse Low Trax each give a new spin to one track from "You're Super In Diagonal", the latest album by Ant Orange. Their versions of "Monogome", "Flutter", and "Cracker" are complemented by a brand new track: "FFF".

Villalobos keeps it short and sweet - at least by his standards. His rendition of "Monogome" translates the mutant jungle vibes of the original into an entirely different dialect while maintaining its psychedelic qualities. The chugging, nine-minute-long 'Siebhouse Remix' is at once rhythmically intricate and positively disorientating. Ada proves to be as imaginative as ever with her first remix in three years. Her take on the album opener "Flutter" extracts the track’s warmth and transplants it into a laid-back downbeat track. She also incorporates the vocals from "Monogome", but gives it a very different spin and adds a healthy dose of autotune to it in the process. Dreamy, hazy, blissful.

On the flipside, Detlef Weinrich approaches things very differently. His 'Bo Bo Zy Remix' of "Cracker" offers industrial at its most inebriated, dub riddims after a bottle of hard liquor instead of a spliff. Ant Orange’s "FFF" then seems to mediate between those three very different approaches: danceable yet melancholic, challenging yet restrained, it picks up on the underlying concept of "You're Super In Diagonal", combining IDM’s penchant for complex rhythmic structures and a directness inherent to hip-hop music since the early days of the genre up until the age of UK drill.

Matt says: I'm still a sucker for a Villalobos remix! The ketty-techno demigod's crisp-packet textures and disassociate production sending my into 5D again on this epic remix of "Monogome". Elsewhere, IDM and EDM fanatics are more than catered for on this forward-facing and highly sophisticated electronica showcase. TIP!