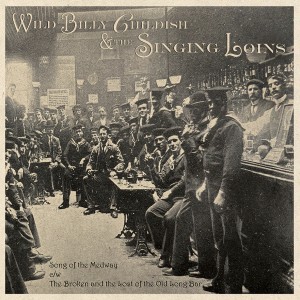 Billy & The Loins reunite for a tribute 7” to founding Loins member Chris Broderick. Billy recorded the first two Singing Loins LPs with Chris Broderick and Arf' Alan in his bathroom at May Road, Rochester in 1991 and 1993. The lads then decided to record an LP of folk variations of Billy’s own tunes, called At The Bridge. The Singing Loins then went their own way recording many LPs. Fast forward to late 2021 and the singer Chris was diagnosed with blood cancer. Before his passing in January 2022, he let Arf (and later Loin Rob), know that he wished them to carry on the group. That said Billy proposed a memorial 45 (and an LP to follow). The tracks: ‘The Song of the Medway’ is about their hometowns of Rochester, Chatham, Strood and Gillingham, all on the banks of the River Medway. Chatham's ancient Dockyard was where Nelson’s Victory was built. The Broken and the Lost of the Old Long Bar celebrates a drinking hole on Chatham High Street (which once boasted more pubs and brothels in a single mile than anywhere in the world). Especially written by Billy for this return of The Singing Loins, the songs are at once brand new and ancient.

1. Song Of The Medway
2. The Broken And The Lost Of The Old Long Bar