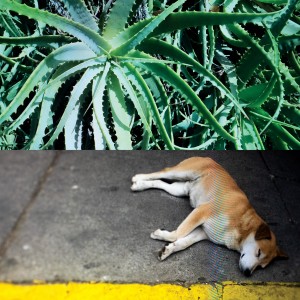 RIYL: William Basinski, Wolf Eyes, Gas, Tim Hecker, Emeralds, Yellow Swans, Flying Saucer Attack. Steve Bates is an artist and musician known for his work with post-rock ensemble Black Seas Ensemble, duos with Timothy Herzog and Sophie Trudeau of Godspeed You! Black Emperor, amongst others, as well as a series of digital-only sonic explorations on his own label, The Dim Coast. All The Things That Happen is his first full-length album for Constellation. For this album, Bates pursued a more stripped down exploration of the noisier terrain of the cheap timbre and tonality of the much-loved Casio SK-1 keyboard sampler. These sounds were fed through a variety of electronics, effects, amps, cassettes recorders to shift into their current form heard on these tracks.

Steve notes that all the tracks started off as ambient, "but I always kept reaching for more texture and noise." Getting reacquainted with the Casio SK-1 was the initial focus on developing the music here. Processed and manipulated during the recording and mixing stages, these initial SK-1 sessions became the foundation of this body of music. Working within the rich world of experimental electronics, these tracks have a core melodicism to them and maybe even a melancholy, as distortion and overtones saturate and spray the music in various directions, while feeling whole and integrated as a body of sound. A fixture of Winnipeg's burgeoning anarcho-punk and social justice community in the 80s-90s, Bates played in hardcore and indie rock bands (XOXO, Bulletproof Nothing) while contemporaneously continuing to fiddle obsessively with the shortwave radio his father bought him as a child — sensibilities that continue to meld and inform his sound work to this day. Bates founded the Send + Receive Festival in 1998, a crucial development in putting Winnipeg on the map for avant music and experimental sound art, which he helmed for seven years. Moving to Tiohti:áke/Montréal in 2005 he took on the Sound Coordinator position at Hexagram (Concordia University), released solo and duo work on ORAL_records and two albums with his Black Seas Ensemble on The Dim Coast, while pursuing myriad other ongoing audio research, installation and collaborative projects. His exhibition and site-specific works have been presented throughout North America and Europe, Chile and Senegal.

A1 Groves Of…everything!
A2 These Problems Are Multiplied By The Difficulty I Have In Front Of A Tape Recorder
A3 Glistening
A4 Covered In Silt And Weed
B1 Destroy The Palace
B2 Glimpse An End
B3 Bring On Black Flames
B4 We Do Not, Nor To Hide
B5 September Through September