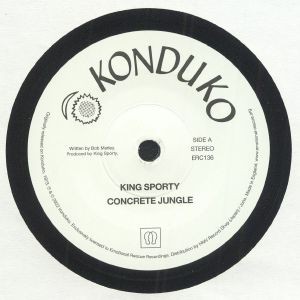 The second 7" in the Konduko series reissues this mega-rarity, Noel Williams aka King Sporty's own version of Bob Marley's Concrete Jungle. The connection between Marley and Williams was long-standing, both living in the tenements of West Kingston and gaining their musical foundations as part of the Studio One, that would reach fruition when they later co-wrote Buffalo Soldier together.

Clement Dodd's organisation was more than a label, running a sound system, studio, pressing plant and its own distribution. As Deejay on the system and later releasing his debut single on the label, William's learnt his craft, taking this knowledge to Miami and replicating much - expanding the Konduko label to encompass studio, plant and distribution.

First recorded with Lee Perry, Marley's 1971 original was famously rerecorded for The Wailers move to Island Records and their 1973 album, Catch A Fire. Here, a rare Williams' vocal is backed with horns atop a reggae-funk groove. The songs message of struggle is universal and everlasting, even with a touch of Miami swing.

This is backed by Young Girl, a single in its own right, from the same period. A rocksteady, breakbeat shuffle bely the songs roots in late 60s soul, with a powerful counterpoint vocal from wife and partner, Betty Wright. A collector's item itself, together they are essential.

Matt says: One of two King Sporty 7"s in this week. Hard to pick a favourite - they're both killer. And so nice to see his pre-disco evolution from Jamaica, to Miami and with more reggae focussed stylings from what would flavour his later discography. The Bob Marley and Lee Perry connection also makes these two 7"s highly desirable.

King SportyDance To The Music