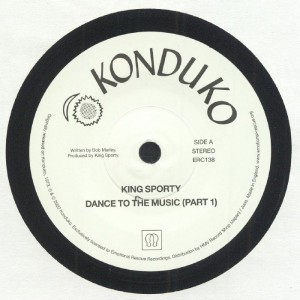 The Konduko 7" series ends with the 4th and possibly best single with Noel Williams aka King Sporty's cover version of Bob Marley's "Them Belly Full", here released as "Dance To The Music".

First released on the Natty Dread album of 1974, it was Marley's first album working away from Peter Tosh and Bunny Wailer and was a spiritually charged political and social statement, also featuring classics "No Women, No Cry", "Lively Up Yourself" and "Rebel Music".

As an associate and friend from their Studio One days, William's version makes sense, in the tradition of covers throughout reggae's history. Appearing a year late, the 1975 single came in Jamaican and US pressings, a nod to Konduko's roots, having started in Kingston before the move to Miami in the earlier part of the decade.

A warning against allowing the poor to go hungry, with the prophetic 'a hungry mob is an angry mob', the cover includes a lot of the Miami feel Sporty was incorporating. With instrumentation again from the Ocean Liners KC And Sunshine backing band, the horns and guitar raise the soul, with counter keys, Part 1 is a straight vocal, while Part 2 is close to a Version but more than an instrumental and in its title, shows its funk and soul background too. A perfect end to the series, the uplifting tracking belies the powerful message, bringing the Miami swing to the JA groove once more.

Matt says: More from King Sporty's early period with a riotous cover of Bob Marley's "Them Belly Full". One of two releases on Konduko this week - both essential collectors items and strong relics of reggae-crossover history.