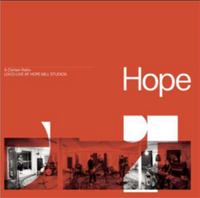 A Certain Ratio present their recording of the ‘Loco Live at Hope Mill Studios’ session, originally a live stream of the band’s sensational 2020 album ‘ACR Loco’.

After a 12-year hiatus releasing albums, ‘ACR Loco’ was created by a confident and revitalised ACR. The band had jumped back into the studio after their most successful tour in over 20 years to record ‘ACR Loco’, and in the lead up to the release, they filmed and recorded this live session at the heart of the Manchester music scene - Hope Mill Studios. The session featured Maria Uzor of Sink Ya Teeth on vocals and the recorded vocals of the much-missed Denise Johnson.

“‘ACR Loco’ feels more than anything like a celebration - the long awaited re-arrival of one of the best bands to ever bring post-punk to the dancefloor.” - Treble

“On their first new album in over a decade, Manchester’s funkiest post-punk band offer an imperfect distillation of their 40-year legacy, updating their classic sound with nods to contemporary beat-driven music and political strife.” - Pop Matters