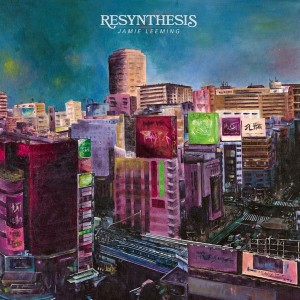 Having established himself as one of the most sought-after young jazz guitarists in London, Jamie Leeming has steadily carved out his own musical niche, during his extensive work for the likes of Alfa Mist, Tom Misch and Jas Kayser. His debut EP ‘Heartsong’ gained support from Jazz London Radio as one of the “Best Jazz Releases of 2015” and his follow-up collaborative album ‘Flow’ (with pianist Maria Chiara Argirò) received critical acclaim for The Guardian’s “Jazz Album of the Month”. Leeming now unveils his debut solo long-player ‘Resynthesis’ via Alfa Mist’s Sekito imprint.

Jamie’s curiosity has always been a key part of his ever-evolving relationship with music. Whether that be as a teenager and being captivated by the cover of Miles Davis’ Bitches Brew in a local HMV, or his fascination with how we experience memories. ‘Resynthesis’ sees the guitarist creatively hitting his stride and exploring new sonic territories as he takes on the role of producer.

‘Resynthesis’ was created with the help of a handful of close friends, regular collaborators and some of the tightest young players around, many of whom met at an improvised music night hosted by Hugo Piper (who also plays on Resynthesis) called Champion Sounds. It was at one of these nights that the basis for ‘Champion’ was formed, plucked from a twenty second snippet recorded on a phone of one of the legendary jams, which has in turn been reimagined on ‘Resynthesis’ by some of the musicians that were present on the night itself. In addition to the trio instrumentation, Quinn Oulton and Nathaniel Facey lend their skills on saxophone. The album is tied together by artwork from painter and musician Kaya Thomas-Dyke, which includes reference to a number of the memories the album is inspired by.