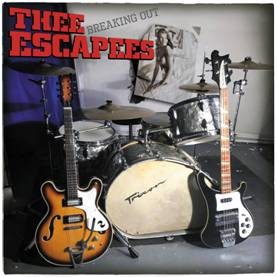 Thee Escapees are a trio of runaways, re-grouping to make and perform musical happenings, some of which are now laid into two continuous grooves. Inspired by the sounds of 1960's Garage-Beat -Trash, with a mixture of Rhythm & Blues, and a Rock n Roll beat, that's gonna knock your towelling socks off!! Based in London, England, they've played in some cracking bands over the years, Their influences are The Vibes, The Yardbirds, Nine Below Zero, The Milkshakes, The Sonics and Bo Diddley. Get the picture? Breaking Out is a thirteen-strong track album, which also includes Thee Escapees take on Del Shannon's 'Runaway'.