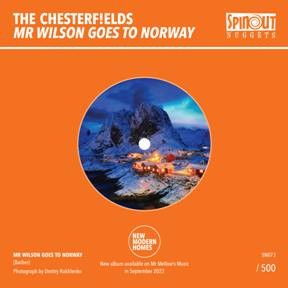 Having just released a new single 'Our Songbird Has Gone' with Mr. Mellow's Music (28 years since their last record release), The Chesterfields are back with another single, this time a Double-A side featuring 'Mr Wilson Goes To Norway' (a follow up to 1987's 'Oh Mr. Wilson!'), with Simon on vocals, and 'Year On The Turn' on the flip, with Helen on vocal duties. These two tracks have been lifted from their forthcoming album 'New Modern Homes', which will follow in September, via Mr. Mellow's Music

The ChesterfieldsOur Songbird Has Gone