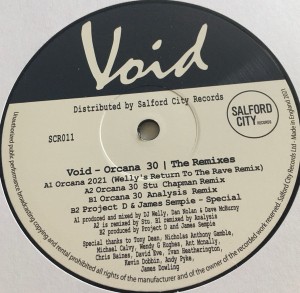 Salford City Records come through with a seriously strong dubplate edition of this infamous DJ Welly track from 1992. Void were actually made up of three producers: Paul Welding, Daniel Nolan, Dave McBurney, but it was Paul aka DJ Welly that hammered the track at raves across the UK resulting in the track's cult following.

"Orcana", released on Manchester Underground in 1992, is an early example of trance meeting piano house. It's got a tough, highly digital groove whilst the piano riffs are sharp and rushing. Some of the synth sounds would go on to be popular across hard house and psy trance scenes whilst the vocal part ('the ultimate seduction') will get massive crowds in e-harmonious euphoria - an absolute belter of a track that's rightfully worshipped by ravers from the era. On this version with also get a remix from Stu Chapman who gives the track a proper hardcore makeover - deploying proto-jungle breaks and a rugged bottom end synth hook. Nasty, bass bin rattlin' rave for the crusty systems...

On side B we get a more bouncy, almost Balearic-house version of "Orcana" tweaked by Analysis. The bucolic, blue sky nature of Britain's rolling countryside coming through strong on this free-party sizzler.

Finally, Salford City's Project D & James Sempie remix "Special" - a hi-nrg vocal cut with a kinda handbag house feel with uplifting pianos and hyperactive vox - a fitting endorphin-rushing rocket blast to close off this most crucial of 12"s. Do not sleep on this one massive!

Matt says: Massive coup for Salford City Record who have managed to drag the DJ Welly-hammered "Orcana" from the archives for an official repress. Originally released on Manchester Underground which was right round the corner from our current shop - this is a true slice of underground Manchester music history. Updated with some new remixes.