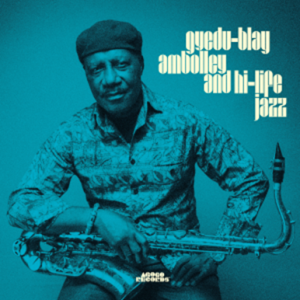 Ambolley is revered as the Simigwahene in Ghana – The King of Simigwa-Highlife. Because of his deep, soulful, and funky Highlife sound, he is also sometimes referred to as the “James Brown of Ghana.” And not without reason. His blend of Highlife, Funk, Jazz, Soul, and proto-Rap was and is still exhilarating.

He learned music from outstanding artists like Sammy Larteh and Ebo Taylor, with whom he played In the Uhuru Dance Band. Together they founded the Apagya Show Band in 1974. Now, after more than 40 years active in music and his numerous albums, Gyedu-Blay Ambolley is a living legend, too.

Gyedu-Blay Ambolley exploded on the music scene in 1973 with a jazzy, funky, and soulful Highlife sound he called SIMIGWA-DO. Building his own Simigwa style and leaving traces around the world, today the versatile, irrepressible and highly revered singer, composer, bandleader, multi-instrumentalist, producer, and “musical-life-force” has more than 30 music albums to his credit.

On his new album "Gyedu-Blay Ambolley & High Life Jazz" you can hear his versions of some classic Jazz tunes like "Round Midnite", "Love Supreme", Footprints" and "All Blues" as well as some new compositions by the Simigwa - Man himself.