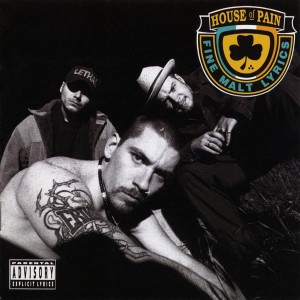 The album also featured Cypress Hill member B-Real on "Put Your Head Out" and Funkdoobiest's Son Doobie on "House and the Rising Sun", both members of the musical collective Soul Assassins.

Q magazine "… their music is of the dense, hard- hitting school of hip hop...the group have absorbed black rap's musical lessons and create a satisfying platform for their above average deliveries..." The Source "…a very solid and at times exceptional album...imagine if Licensed to

Ill wasn't an upper middle class Jewish thing but rather a working class Irish thing...the atmosphere is like that of a cross between a frat party and a bar room brawl..."

Salutations
Jump Around
Put Your Head Out
Top O’ The Morning to Ya
Commercial 1
House And The Rising Sun
Shamrocks And Shenanigans
House Of Pain Anthem
Danny Boy, Danny Boy
Guess Who’s Back
Commercial 2
Put On Your Shit Kickers
Come And Get Some Of This
Life Goes On
/ One For The Road
/ Feel It
/ All My Love