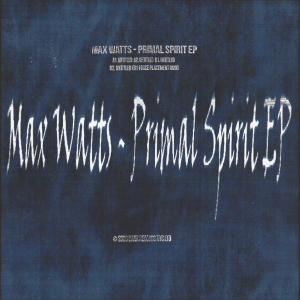 Max Watts is a young, up-and-coming DJ and producer from Tennessee. He co-runs Limited Network, a white label techno imprint and crew of young producers dedicated to making savage DJ tools. Watts’ energy and enthusiasm shines on "Primal Spirit", his tribute to tribal techno. This debut release on BANK is a testament to his dedication to the medium of vinyl DJing - no fanfare, just supremely crafted, untitled tracks for any set. This record features a remix from Force Placement out of Los Angeles. Recommended if you went to Tribal Gathering at Sankeys between 1999 - 2003, listened to any of Richie Hawtin's 'Decks FX & 909' mixes; enjoyed Jeff Mill's iconic 'Exhibitionist' mix. What else - think DJ Rush, turn of the millennium Carl Cox, Oliver Ho, James Rushkin. Basically, that fruitful era for techno when it went really fucking tribal! A monstrous release not to be overlooked - big TIP.

Matt says: Phwwaoooor! 'Ave some of that! Real deal tribal techno excursions with that millennial fire coursing through their stems. For the feathers and face paint brigade and the OG DC-10 mobsters - this is the absolutely dogs bollox.