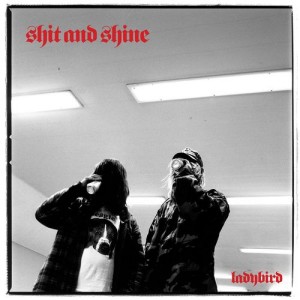 Back when Shit And Shine formed, the idea was basically to sound like their heroes DRUNKS WITH GUNS and STRANGULATED BEATOFFS, using that same basic formula. A big dumb ass catchy riff played over and over until the joke gets old ... then keep going.

Recorded live at Southern Studios, London (fun fact: the same room where BAUHAUS recorded 'Bela Lugosi's Dead'!) in 2004 with just two basses, a snare drum, a huge cardboard box and a tiny toy Casio sa-1 keyboard (using the "airplane" sound hitting the same key over and over for 41 minutes)
Some still say it's the best thing shit and shine has ever done. I'm not arguing.

Originally released on CD, and super limited vinyl waaay back in 2005. This was Shit And Shine's second release and it sold out REAL quick.

Remastered and beefed the hell up by Craig Clouse at Shit And Shine Ranch 2022.