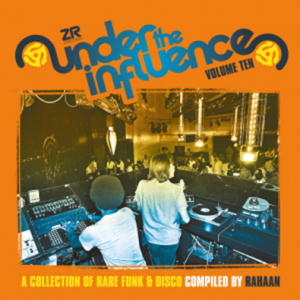 Z Records continues its commitment to unearthing the obscure and long forgotten tracks from the last 40 years through the ever-popular Under The Influence series. Following on from Red Greg, Nick The Record, Sean P, Faze Action, and last years Alena Arpels. It’s now the turn of one of the scene’s most impressive collectors & DJs; Rahaan

Hailing from Chicago his love affair with muzik started in the late 70’s early 80’s, listening to muzik on the radio combined with his mom and dad playing their records every weekend. In the early 80’s on the South side of Chicago, he started hearing something a bit different, what they called ‘house muzik’. A combination of Disco, Jazz, Soul Funk, New Wave and Italo Disco. Here Rahaan digs deep into his impressive record collection that he has collected, built up and crafted over his many years of travelling, networking and DJin to showcase 22 of his finest and rarest cuts. Many of the tracks on the album would cost hundreds and that’s if you were even able to find the originals!