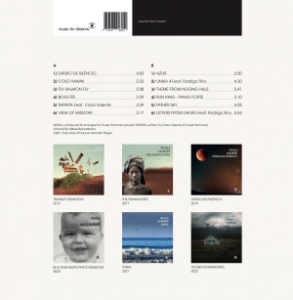 Danish Artist Troels Hammer has released 5 albums to date, with his sixth House of Memories due out later this year. As yet there has only been a sampler 12” on vinyl. Therefore ‘An introduction’ LP is a compilation of tracks exclusive to Vinyl for fans and new listeners to enjoy.

The style is instrumental and moving in the area between nu-classical, lounge, dance, ambience and electronica. When Troels Hammer sits down at the piano, the music flows through him and brings the audience in a mood that is both relaxed and intense. He himself says that he creates music you can go in and out of –and get carried away by.

Intermediation has been the centre of Troels Hammer’s entire professional life and also musically he is driven to set the tone for stories and touch elements recognizable to the audience. He can be experienced on stage alone, plays brilliantly with others and shares gladly stories about the music as a part of his performance.

A1 Diário De Silêncio
A2 Cold Hawaii
A3 Fly Salmon Fly
A4 Bogotá
A5 Infinita Feat. Clara Valente
A6 View Of Wisdom
B1 Azur
B2 Unika 4 Feat. Rodrigo Sha
B3 Theme Frm Ngong Hills
B4 Run King - Piano Forte
B5 Father Sky
B6 Letters From Uhuru