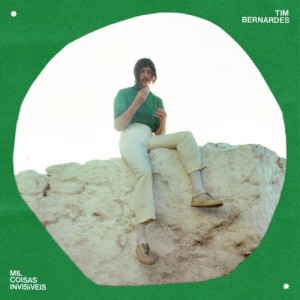 Tim Bernardes, a Latin Grammy nominated singer, songwriter, musician, composer, and producer from São Paulo, Brazil, has just announced the release of his forthcoming album Mil Coisas Invisíveis on Psychic Hotline. Bernardes has captivated global audiences with his delicate balance between sounds seeped in Brazilian tradition and contemporary indie and folk that is deeply warm, intimate, emotionally resonant and healing. He’s collaborated with the likes of Fleet Foxes, Tom Zé, David Byrne, Gal Costa, Devendra Banhart, Shintaro Sakamoto, and more. Mil Coisas Invisíveis is his second solo album, following his 2017 debut Recomeçar. The album was written primarily while touring with his acclaimed tropicalia-indie group O Terno, and heading into 2020, which is when he decided to step back from touring and focus on new songs. What emerged was an album that is generous and intimate- a series of meditations on metaphysical transformation in the face of grave uncertainty. The first single, ‘Nascer Vivier Morrer’ opens the album, tracing the journey of life from birth to death. One of the last songs written for the album, Tim feels that it connects the rest of the songs on the album- ‘I understand how the album looked from the outside and understand how it accentuated this conscious shift in me.’ The song says a lot in a few words, meditating on the magical experience of existence and presence. Joyful and introspective, the song is carried by simple instrumentation and layered vocals that render the song remarkably intimate. "This is a very short song that when I wrote I felt it fit as kind of an opening to the album. The songs in the album have some different vibes between them but I feel that this one connects them in a very synthetic way. Trying to say a lot with few words. About 'just being', about how magical the existence of existence is. About the presence of presence, and presence of absence in life. Like the song says, 'in the rare infinite moment, to live.” Says Tim about ‘Nascer Vivier Morrer’