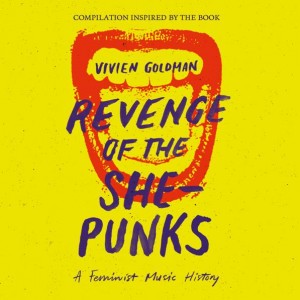 Since the historiography of punk is a male-dominated one, a "Revenge of the She-Punks" was long overdue. This feminist reckoning was written by none other than post-punk pioneer Vivien Goldman, who has an insider's perspective due to her work as a musician and one of Britain's first female music writers. Along four themes - Identity, Money, Love and Protest - the "punk professor" traces empowering moments that punk holds especially for women. This Compilation is inspired by the book, which was originally released by University of Texas Press in 2019.

Compiled and with liner notes by Vivien Goldman. “We're not talking a mean-spirited gotcha! revenge here. As both my book that inspired it and this recording prove, us She-Punks' revenge is about our complex survival in an all too often hostile environment.The book offers a template to finding a way through the patriarchal labyrinth of the music industry by telling the back- stories of thirty-eight songs by women from not only the Anglophone countries, but Africa, the Caribbean, Asia and Eastern and Continental Europe. Together, they demonstrate how girls around the world, with no or few role models, found ways to thwart blockages and become self-expressive musicians, breaking traditions and expectations, setting new standards with every chord. Alas, for a raft of factors it was impossible to include them all; but herein lies a stirring and representative selection. Cumulatively, we hear how female artists everywhere are moved to sing about the common issues that I distilled down to be the core themes of the book: the bare-bones of living that connect us, wherever we are. We open with Identity featuring Fea, Big Joanie, The Raincoats, Blondie and Poly Styrene with X-Ray Spex. Then comes Money with Patti Smith, Shonen Knife, Malaria! and the Slits; followed by Love/Unlove: Crass, Cherry Vanilla, Grace Jones, Rhoda Dakar with the Special AKA, Alice Bag (The Bags), Tribe 8 and the Au Pairs, the Mo-dettes, Neneh Cherry from the UK/Sweden/US and this writer/musician. The closing chapter, Protest, features Sleater-Kinney, Jayne Cortez and the Firespitters Skinny Girl Diet, Vi Subversa and the Poison Girls, the Czech Republic's Zuby Nehty, Colombia's Fertil Miseria and Jamaica's Tanya Stephens. Many people have questioned how I arrived at those four themes (answer: thinking,) and so far, no-one has disagreed.However, in sequencing this compilation, the important thing was to sonically flow through the breadth of our creativity, led by the rhythms and sound, rather than the lyrics; they, I already knew, formed a compelling whole, an implacable critique. My perspective on punk is based on spirit rather than adherence to the venerated concept of the genre as only a frenetic full-frontal sonic attack (though that is also represented here). Having been involved with the movement at the start in mid-1970s London, as Features Editor of the punk rock weekly, Sounds, I understood it to be a front line, inclusionary genre, with DIY at its core, which is why it was the first genre to give anything approaching an equal platform to women musicians.

Especially for the less conventional, all too often the path for women artists is still steeper than that of male peers. Despite the massive success of today's female superstars, there remains a quota perception in an industry that still largely lives in boystown (though always factor in that it's not the men, it's the mentality,) who are less receptive to forceful females; like the sort of bookers who say, Well, we've done our bit, we've booked our female artist - as if booking women were some grim post-MeToo duty.But as heard in these tracks, in all its forms, whether sounding strident or soft, punk is a music of resistance; women's punk specially so. We continue to rail at and use our music to shift a system which, in America as this release comes out - let alone in countries long known to be suppressive of women - our basic human agency is under attack on more than one front, notably where equal pay and abortion are concerned. Welcome to some very necessary and in many cases, too little heard voices of women whose creativity could not be stopped, and who managed to use music to mould their environment, create their own space, and live as self-actualized artists.”