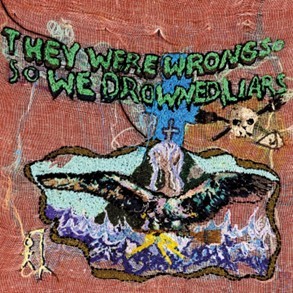 They Were Wrong, So We Drowned is the new instalment from the Liars’ reissue series, where every two months an album from the back catalogue is being released on recycled coloured vinyl.

Originally released in 2004, Liars’ second album scrutinises pagen worship rituals in punkflore fashion with its title alluding to the horrors and injustices of witch-hunts conducted throughout history. Each song is a page from a story that frontman Angus Andrews crafted from his in-depth look into fairy tales and folklore, illustrating a conflict between witches and a scared Christians village. They Were Wrong, So We Drowned was a creative transition and saw the band severing their ties with a scene they inaugurated on their debut album, and had decidedly, outgrown by the second.

1 Broken Witch
2 Steam Rose From The Lifeless Cloak
3 There's Always Room On The Broom
4 If You're A Wizard Then Why Do You Wear Glasses?
5 We Fenced Other Gardens With The Bones Of Our Own
6 They Don't Want Your Corn, They Want Your Kids
7 Read The Book That Wrote Itself
8 Hold Hands And It Will Happen Anyway
9 They Took 14 For The Rest Of Our Lives
10 Flow My Tears The Spider Said