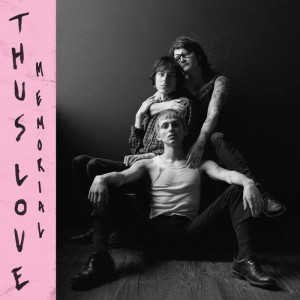 The Brattleboro, Vermont trio THUS LOVE stand together, a bond cemented by their experience as outsiders looking in. For THUS LOVE, DIY is an ethos that reflects not only their musical vision but their very existence as three self-identifying trans artists. From the band’s inception, Echo Mars (she/her), Lu Racine (he/him) and Nathaniel van Osdol (they/them) have lived together under the same roof, designed and produced their own merch, and created their own recording studio from scratch. “I realize that most artists don’t live this way,” says Mars. “But for us, it was never really a choice. The art we make is so tied to who we are and the community we’re a part of, that this is the only way we can possibly do it.”

The band was just starting to regularly headline renowned local venue The Stone Church when everything came to a screeching halt. Rather than idly wait, the band decided to take their future in their own hands. Armed with nothing but YouTube videos and her innate curiosity, Mars constructed a makeshift studio in their apartment, recording during odd hours when their next-door neighbors were out and about.


Looking back now, Mars is glad the band decided to forge ahead. “I obviously would never want to go through a pandemic again, but I’m pretty confident in saying that this album would not be coming out in 2022 if we hadn’t had the forced downtime.” Their resulting debut, Memorial, is a stunningly accomplished album. The hallmarks will be unmistakable to anyone who has ever obsessed over classic LPs from indie and post-punk’s progenitors—everything from the chiming, Marr-esque guitars on opener “Repitioner” to the pugnacious rhythmic punch on lead single “In Tandem”. But even more impressive and exciting is how THUS LOVE manage to tap into this celebrated lineage to find their own unique voice and tell their own story.

Ultimately, despite the many difficulties and setbacks, the story of THUS LOVE and Memorial is one of triumph. Of seeking meaning in struggle. Of embracing community and love. Of finding joy in rebirth.