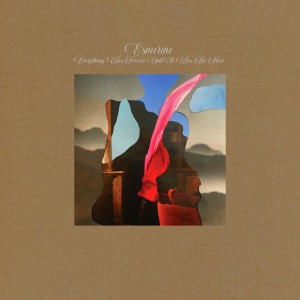 Esmerine presents Everything Was Forever Until It Was No More, its first album in five years, following a celebrated run of Juno Award winning and nominated records throughout the preceding decade. Founded by ex-Godspeed You! Black Emperor percussionist Bruce Cawdron and cellist Rebecca Foon (Saltland, Silver Mt Zion, Set Fire To Flames), the acclaimed instrumental music ensemble and has long embroidered emotive chamber works using threads of post-classical, post-rock, Minimalism, neo-Baroque, jazz, pop and a wide array of folk traditions. Esmerine conjures a distinctive and immediately identifiable sound that consistently defies the trappings of “fusion”, forging emotive cinematic soundtracks under the overriding sonic sensibilities of postpunk grit, Wall-of-Sound, drone and dark ambient. Recorded by longtime co-producer Jace Lasek (The Besnard Lakes), the new album manifestly carries on in this fine tradition. Everything Was Forever Until It Was No More completes Esmerine’s “Anthropocene” triptych: a series of album-length meditations that began in 2015.

The album grapples with existential tensions between atmosphere and airlessness, seclusion and claustrophobia, forbearance and satiation, scarcity and abundance; it is one of Esmerine’s most restrained and wistful works. Instrumental densities ebb and flow, melding into each other with gauzy timbral warmth, sometimes tracing fleeting tendrils outwards, but always rotating around the saturnine gravitational force of a darkly glowing sonic center. Everything Was Forever Until It Was No More is like a somber forest lit by a closely-orbiting opalescent planet; it could be the alternate score to Von Trier’s Melancholia or Cormac McCarthy’s The Road.

Esmerine planted these compositional seeds before pandemic rooted everyone in place, under the auspices of a grant from the Canada Council for the Arts and a 2019 residency at Le Château de Monthelon in France. Lasek then began documenting the band between lockdowns in various stripped-down configurations with spartan remote equipment at the rural Québec homesteads of Cawdron and Foon, culminating in final sessions at Foon’s converted barn in summer/fall 2021, notably with extensive use of the barn’s resonant acoustic piano. Brian Sanderson appears on his fourth Esmerine album since joining in 2012, continuing to expand the ensemble’s ethnomusicological sensibility and melodic sound palette with guitars, ngoni, ekonting, hulusi, and brass horns of all sorts. Everything Was Forever… also signals the full integration of bassist Philippe Charbonneau, who joined Esmerine as a touring member pre-pandemic and plays throughout the new album, along with sound design contributions via synth, tape echo and other processing. Everything Was Forever Until It Was No More features the pandemic collage artwork of Maciek Sczcerbowksi, in a second Esmerine album art collaboration following their Juno award for Album Package of the Year for Lost Voices in 2015