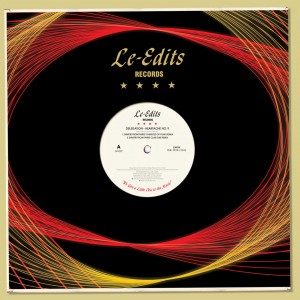 French Disco maestro Dimitri From Paris' Le Edits imprint is back supplying you with the excellence you've come to expect. As ever beautiful new versions of deep soul and disco classics alongside the most fantastically realised limited physical artefacts are the name of the game. When you buy a Le Edits release, you know you are holding something très magnifique in your hands.

After a short break, Dimitri treats us to yet another sublime set of versions, this time bringing us brand new mixes of UK Disco flavour centred on Midlands group - Delegation. The A-Side "Heartache No. 9" is a club sure-shot from their 1979 debut LP 'Eau De Vie', it's one of the groups most well known tracks and always found favour among underground DJs and discerning dancers. With its instantly familiar and much sampled bassline, this is a real floor-filler and a genuine classic. Featured here are Dimitri's brand new and essential '9 Minutes Of Funk' and 'Club Dub' remixes. Side-B sees 'One More Step To Take', also lifted from the group's stellar and slept-on debut album, get some Le Edits love. This time Dimitri teases out the Philly-esque grooves to new heights with 2 killer reworks that proudly stand head and shoulders alongside anything that came out of the city of brotherly love in its heyday, complete with an outstanding vibes solo too!

All mixes are fully sanctioned and created in conjunction with the artists, rights holders and Above Board Distribution. These releases are 100% official and therefore essential. This isn't an 'under the counter' operation, Dimitri and Le Edit are here to bring back quality and class to the re-edit game by doing things, once and for all, properly and respectfully. All Le Edits releases include a no re-press guarantee. Utilising the highest end tip-on heavy duty sleeves, and outer protective sleeves, pressed onto 100% virgin vinyl. These new mixes have been legitimately commissioned and will not be available digitally. This product cost 4 times as much to produce than your average Disco edit 12’’ because Le Edits believe in quality first and foremost.

Martin says: The French maestro returns to his much lauded Le Edits label to rework two stonkingly great Delegation tracks. The results are as fabulous and as striking as you'd expect - wear your best shirt, don't scrimp on the cocktail budget - this is gonna be the best Saturday night of the year!

Soul ReductionsGot To Be Loved