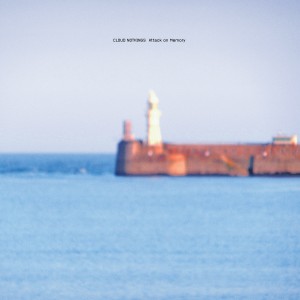 It’s housed in a foil jacket with all new colorized artwork, is pressed on Sky Blue vinyl, and includes two bonus flexi 7"s with two never-before-released tracks, "You Will Turn" and "Jambalaya" from the original sessions at Steve Albini's Electrical Audio.

In 2009, Cleveland’s Dylan Baldi began writing and recording lo-fi power-pop songs in his parents’ basement, dubbing the project Cloud Nothings. His music quickly started making the Internet rounds, and fans and critics alike took note of his pithy songcraft, infectiously catchy melodies, and youthful enthusiasm. Baldi soon released a string of 7”s, a split cassette, and an EP before putting out Turning On—a compilation spanning about a year’s worth of work—on Carpark in 2010. January 2011 saw the release of Cloud Nothings’ self- titled debut LP, which, put next to Turning On, found Baldi cleaning up his lo-fi aesthetic, pairing his tales of affinitive confusion with a more pristine aural clarity. In the interval since the release of Cloud Nothings, Baldi has toured widely and put a great deal of focus on his live show, a detail that heavily shapes the music of his follow-up album, Attack on Memory.

After playing the same sets nightly for months on end, Baldi saw the rigidity of his early work, and he wanted to create arrangements that would allow for more improvisation and variability when played on the road. To accomplish this desired malleability, the entire band decamped to Chicago—where the album was recorded with Steve Albini—and all lent a hand in the songwriting process. The product of these sessions is a record boasting features that, even at a glance, mark a sea change in the band’s sound: higher fidelity, a track clocking in at almost nine minutes, an instrumental, and an overall more plaintive air. The songs move along fluidly, and Baldi sounds assured as he brings his vocals up in the mix, allowing himself to hold out long notes and put some grain into his voice. Minor key melodies abound, drums emphatically contribute much more than mere timekeeping, and the guitar work is much more adventurous than that of previous releases.

For all of early Cloud Nothings’ fun and fervor, Baldi admits that it never sounded like most of the music he listens to. With Attack on Memory, he wanted to remedy this anomaly, and in setting out to do so, Baldi and co. created an album that showed vast growth for a very young band.