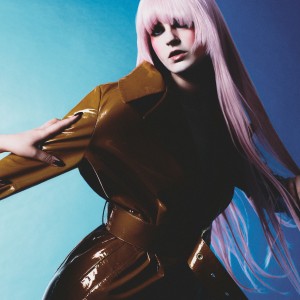 The eleven blistering tracks from the trio, made up of Ella Harris and Josh Baxter (who share lead vocals as well as handling synths, guitars and production) alongside drummer and percussionist Louis Satchell, are made from a formula of acid, disco, blistering synths, the release of the dancefloor and cathartic sprechgesang post-punk.

On their debut album PVA carry that same energy from the live circuit, while also building out a holistic world full of texture and heart. 'Blush' is rich with industrial-sized beats that pack a heavyweight punch, jagged punk spirit, and moments of hushed contemplation from Harris’ poetic lyrics.

It sprints tirelessly throughout, linking influences including Portishead, PC Music, Laurie Anderson, and cult rave-pop duo The Pom-Poms with ease. The album was produced by the band alongside friends Ben Romans-Hopcraft (Warmduscher) and Jamie Neville (Pumarosa) over a two week period at Neville’s home studio in South London. They then mixed the record at FOLD, the club hidden away on a trading estate in East London.

One place intimate, another industrial; this is PVA’s world.