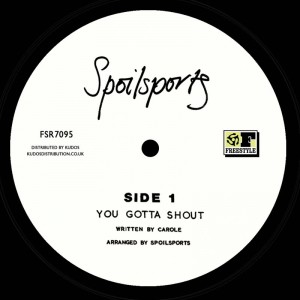 Freestyle Records reissue a DIY 7" from 1980 by short-lived all-female group Spoilsports. Existing at the intersection of post-punk, jazz-rock and modern soul - these two political yet playful numbers were laid down by a band formed from a range of players active in London's feminist and improvised music scenes at the time, and represent the groups only recordings.

Spoilsports began in 1979 with the aim of having an all-female band that could be actively feminist and playful at the same time, with an eye toward gaining an appeal beyond that of the wider women's lib movement of the time. The line-up originally consisted of Carole Nelson on keys, Angele Veltmeijer on saxophone, Sheelagh Way on drums, Lesley Shone on bass, Isabel on congas and with Laka Koq providing vocals. After a short while this would become just Carole, Angele & Sheila - with Ruth Bitelli being brought in on bass, and Barbara Stretch topping things off on vocals. The band played at Gay Pride '79 in Hyde Park, a Women's Music Festival in Neimegen, Holland; lots of benefits, and maintained a weekly residency at The Earl of Aberdeen in Mile End (now sadly demolished).

Unfortunately the group lasted only 18 months or so all in all, and this is their first and last record - in fact, they intentionally laid it down to tape in order to provide a memory of the group before they called it a day, and we are so glad they did! Recorded in Pimlico's Archipelago Studios in the same year that Elvis Costello would record his album Get Happy there, the original 7" gained a review in the NME, whom dubbed it "a cross between Steely Dan and The Joy of Cooking".

Millie says: Nice curveball ear-grabber from this all-female group which kicked hard and stood up for what they believed in. Their only single and it's beautifully! Summery, soulful, well voiced and well lyricized - I love it!

1. You Gotta Shout
2. Love And Romance