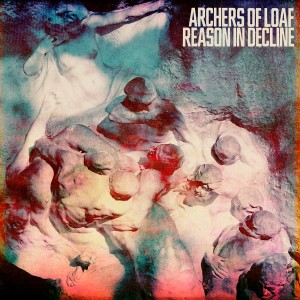 As sculpted shards of guitar tumbling, tolling, squalling shower the jittery bounce of a piano on opener “Human,” it’s obvious that Reason in Decline, Archers of Loaf’s first album in 24 years, will be more than a nostalgic, low-impact reboot. When they emerged from North Carolina’s ’90s indie-punk incubator, the Archers’ hurtling, sly, gloriously dissonant roar was a mythologized touchstone of slacker-era refusal. But this, the distilled shudder of “Human” (as in “It’s hard to be human / When only death can set you free”), is an entirely different noise. In fact, it’s a startling revelation.

In short, this is not your father’s Archers of Loaf, even if you’re a father now who was a fan then. (If that’s the case, congrats on surviving the Plague and getting to hear this fearlessly poignant record, you alt-geezer!) Otherwise, thank your youthful fucking lucky stars, kids! Enjoy Reason in Decline with fresh ears and do as the Archers have been doing: Stay humble, stay informed, express yourself creatively, and try not to lose your goddamned mind while the polar ice caps melt. Peace.