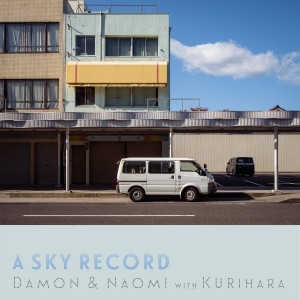 “With its meditative tempos and enveloping guitar work by Michio Kurihara—‘it’s like this golden net,’ Naomi said of his gorgeous, versatile playing—A Sky Record offers shelter from the squall. If it has the glow of a long-delayed reunion between friends, that’s not accidental: Kurihara hasn’t traveled outside of Japan in some time, so Damon and Naomi hadn’t recorded with him in nearly ten years. When they finally made it back to Japan in November 2019 for a brief tour, they were elated to book some time with Kurihara at the aptly named studio Peace Music.

“In those long stretches of quarantime, the tracks they returned from Japan with had distinct moods but not yet any lyrics. (Kurihara works best when trying to conjure a specific feeling or natural image—after all, he did once make a solo record, Sunset Notes, on which every song was based on a different sunset he’d witnessed...) How to write about the pandemic? How to not write about the pandemic? Naomi first struck upon the appropriate tone when re-reading the journals of one of her favorite abstract painters, Charles Burchfield. She arranged this found language into the lyrics of the iridescent ‘Season Without Time,’ which also became a tribute to a friend that she and Damon had lost in the last year.

“From there, the floodgates opened. The wistful and watery ‘Midnight’ (electrified, towards the end, by the slow screams of a Kurihara solo) conjures Naomi’s nostalgia for youthful summers spent at Jones Beach, while the gentle current of ‘Sailing By’ pays homage to those ritualistic BBC Shipping Forecasts and the waltzing, quintessentially British theme song from which it takes its name.”

1. Oceans In Between
2. Between The Wars
3. The Gift
4. Sailing By
5. Split Screen
6. Season Without Time
7. Midnight
8. Invincible
9. How I Came To Photograph Clouds
10. The Aftertime