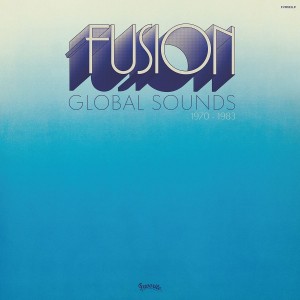 "Buster" is taken from the first and only album of the Swedish band, Sundance. The band from Gothenburg was formed around US trumpet player Stephen Frankevich (notably playing with Mahavishnu Orchestra) after he moved to Sweden. Cosmic, with razor-sharp rhythms, it naturally brings you to the second title, "Hello Mr. Ancuvis" by Renato Anselmi. One of the key players of the Swiss Jazz scene during the sixties and the seventies, Renato also had the chance to play with Harvey Mason or Alphonso Johnson. Funky, jazzy but still a bit breezy, here again sweet vocals nicely blend with uptempo Rhodes part. Also included is another title from Renato Anselmi, "Quiet Fire", a mellow Rhodes-driven ballad with funky accents, wide strings and guitar arrangements.

"Tropical Island" by Zane Cronje, a South-African composer and arranger, was initially a track from a music library catalogue: dreamy, soaked in thorough synthesizers, we're only attached to the earth by the Guiro groove. You'll also hear this cosmic vibe in "Astral Dance" by French-American drummer and jazz musician/composer Daniel Bechet, taken from “Songs To My Father” LP, dedicated to his father the famous sax / clarinet player Sydney Bechet. In this 4 minutes dope jam, keys, guitar and percussion will elevate your mind to another level of consciousness: deep!
The 1860 Band was hailing from Wellington, New Zealand, playing mostly in bars, cafes and pubs - their name is taken from a tavern where they had an extended afternoon residency keeping the clients entertained. Their sole LP, now rare and sought-after, was a nice mix of jazz-funk and disco grooves. Their amazing and groovy cover of "Keep That Same Old Feeling" by The Crusaders, brings the best of their playing.

Otroshakers was formed around Hugo and Osvaldo Fattoruso, as a tribute project to their former band Los Shakers, some sort of copycat band of The Beatles with great success in Latin America. Listening to "Siempre Tu", you can almost hear The Beatles' psychedelic vocal of Sgt. Pepper's Lonely Hearts Club Band. Later joining Ringo Thielmann in the US, they formed the band OPA together, after having recorded for Airto's seminal album “Fingers”. Blending jazz, South-American musical elements and funk, their fusion quickly gained the respect of the NY musical scene.
"Despertar" by Spanish drummer, singer and actor Pedro Ruy-Blas, is taken from Luna Llena, his great first jazz-funk album. The track is a funky piece with wah-wah expressive Rhodes, ending with a beautiful flute solo. "Prologue" by Dutch-French pianist Majoie Hajary (sometimes called the "Hindu pianist"), can be found on La Passion Selon Judas, a very unique religious album blending her own style with psych, funk and jazz elements.

Matt says: Avant, left-of-centre, spiritual-leaning jazz-funk cuts that'll captivate your ears! No idea where they're plucking these from - but everything seems pretty uncomp'ed thus far. You'd wish they'd compiled another disc but the time it gets to the end of side B. Such is the quality of the offerings presented here.