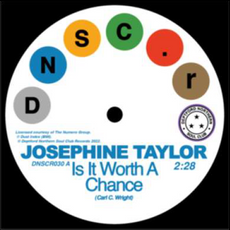 Two tracks from the short-lived Twinight label from Chicago that peaked in the late 1960s and early ‘70s, their biggest star being the super soulful Syl Johnson.

Featuring ‘Is It Worth A Chance’, the flipside of Josephine Taylor’s 1969 single ‘I’ve Made Up My Mind’, original copies of which go for anything between £30 and £100 these days.

A brass peppered funker with a driving bassline behind Josephine’s strutting vocal, it was the climax of her short career that started with three 45s for the Mar-V-Lus label.

Cut with Krystal Generation’s 1970 side ‘Satisfied’, the B-side of their ‘Is It Meant To Be’ that goes for around £75 if you can find a copy.

A female four-piece from Chicago featuring Darlene Arnold, who recorded several sides in her own right as well as half a dozen with Krystal Generation, who also released a couple of singles on Gene Chandler’s Mister Chand label.

Josephine Taylor ‘Is It Worth A Chance’
Krystal Generation ‘Satisfied’