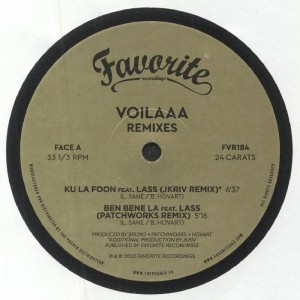 A new EP built with exclusive versions of Voilaaa's some of its biggest hits. Known for its Afro-disco sound and strong dancefloor-friendly festive bangers, these new mixes bring another light to the successful project of Bruno Patchworks Hovart.

On A Side, Voilaaa asked famous Brooklyn-based producer and remixer JKriv (Razor-N-Tape) to provide even more club energy to "Ku La Foon (feat. Lass)”, originally released on Voilaaa's third and last album. The result is a powerful bomb that won't give any rest to the crowd.

The tracklist goes on with "Ben Bene La (feat. Lass)” reworked by Patchworks himself in a very Latin way, taking inspiration from the NY scene and its dancers, "Spanish Harlem" and Mongo Santamaria. You've got to play it loud and we're pretty sure you'll see some special moves on the dancefloor.

On B side, you'll hear another Patchworks remix, this time with probably one of Voilaaa's biggest hits, "Spies Are Watching Me (feat Sir Jean)”. In the footsteps of Moodymann, Masters At Work or the UK Garage scene, Patchworks delivers here some of his classic house music energy. You may know he started his career with house music: he transformed this anthem into a proper deep house cut with the same passion!

Finally, Voilaaa remixed himself! Working on "Tu Mens Devant Moi (feat. Ramatou Traore)”, Voilaaa carries the arrangement closer to the Angolese and Cape Verdean sound, reminding also the sound of Super Mama Djombo from Guinea Bissau. A tropical cut that will bring more and more sunshine to the club.

Matt says: Favourite continue their unrelenting purple patch, depositing on us four exquisite remixes from Patchworks and Jkriv which'll keep any tastefully inclined dancers movin' past midnight and well into the next day. Festival approved!