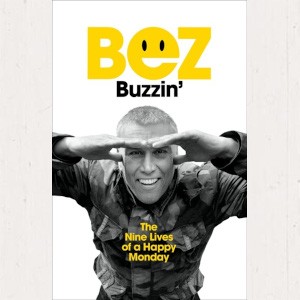 At the height of his initial, turn-of-the-1990's infamy as the maraca-wielding dancer with 'Madchester' giants Happy Mondays, the pop-eyed Mark Berry, forever known to the world as Bez, was visibly a danger to society. He became the so-called C hemical Generation's bug-eyed pied piper, every weekend leading millions out to oblivion and beyond, as they adopted his E-gobbling party lifestyle.

Neither an accomplished musician nor even a very good dancer, Bez was a prime candidate for fleeting celebrity, soon to sink into 'Where Are They Now?' obscurity. That, however, never happened, nor does it show any sign of happening. Through Black Grape, the second band he co-fronted with the Mondays' Shaun Ryder, and his ever-presence in the mass media, Bez's popularity has grown exponentially, his star rocketing ever upwards.

When he bowled into C elebrity Big Brother in 2005, he ended up winning the series, as viewers came to understand his fundamental decency and sunny outlook. His adult life has been extraordinary: unbelievable scrapes with mortality, periods of financial ruin, mindfuck moments like when David Bowie genuflected before him, and enough narcoticstrewn hi-jinx to fill several more volumes of memoir. This is the story of a bad lad who has turned his life good, tracing his passage from earlythirty- something casualty to middle-aged politician, eco-warrior and bee-aficionado.