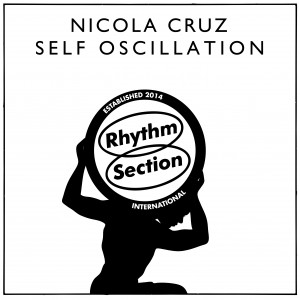 More alluring music from the singular talent that is Nicola Cruz. "Self Oscillation" is made up of 5 club-ready psychedelic workouts swaying with natural momentum, from the Ecuadorian superstar , who makes his 2nd appearance on London’s Rhythm Section INTL.

The internationally renowned producer has been instrumental in pioneering the sound of Andean music over the last decade. Born and raised in Ecuador, Nicola has found his own unique way to tap into Latin America’s illustrious musical past to create something utterly contemporary. His previous projects have had the 4 elements running through as major themes: Fire and lava erupted during his sophomore album, Siku, with an Ecuadorian volcano doubling up as a recording space. And now, with his second Rhythm Section release, we are met with sounds of flowing water that Nicola describes as aqueous explorations. On this EP, "Self Oscillation", Nicola Cruz fuses experimental production techniques with underwater, bass-heavy constructions. Moods change like the tides; from euphoric highs with acid riffs and Latin drum patterns, the music quickly dives to moody submarine basslines and dark, frenetic rhythms.

"Self Oscillation" sees Nicola’s production move to new heights as he expertly bridges the gap between natural and mechanical sounds. With the help of iconic 80s and 90s synths and the retro colours of a Roland Space Echo, his newest work is a hybrid of electronic dance music and a synaesthetic image of nature. In the spirit of his previous EP on Rhythm Section INTL, "Self Oscillation" showcases the synergy - or rather ongoing battle between the organic and inorganic, the analog and digital, civilisation confronted and confounded by nature. It’s within this dichotomy that Cruz revels, and manages to say so much, without words. The ultimate record for our 'Wierd Shit' section! Miss this at your peril!

Matt says: Snapped up by Bradley Zero's keen-eared A&R department and quickly making waves here at Piccadilly. Nicola Cruz' Ecuadorian dance hybrids stand proudly on their own yet are alluring a whole audience of DJs and dancers across numerous musical camps.

A1. Cadera
A2. Residual Heat
A3. Self Oscillation
B1. Surface Tension
B2. Neo Costeno
B3. Pulso Invisible