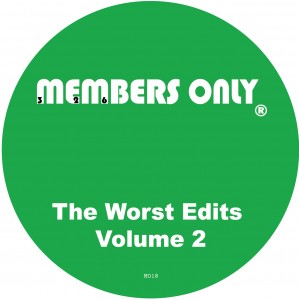 The triumphant return of one of the best underground edit series we've ever had in the shop! Jamal Moss' cult Members Only returns! Culled from 20 year old VHS tapes restored using a baking method, these edits are real deal Chi-town badness with artistic psychedelic filtering of proto house & disco.

On this volume he kicks off with a truly rare slice of proto-house, looped to perfection and flailing with overcharged energy; there's Lil Louis / Ron Hardy echo claps coursing through the A2 - again an unbeknownst electro-disco thrust - and this track to me is the very epitome of the Members Only series - earth shattering dancefloor moments that suck you into their vortex and spit you out an altered human being. One of his typically mental diva / vogue vox tracks manages to squeeze even more freshness out of Lyn Collins' "Rock Me Again And Again..." in a train wrecked collage of shermy club funk that could only come from the mind and hands of this twisted Chi-town genius. Finally, he keeps the rock club goths happy with a brutal industrial edit that pummels us into the asphalt repeatedly, leaving us bruised, battered and begging for more.

The natural predecessor to Ron Hardy & Adonis - there's none that touch him at this shit!

Matt says: Not one but TWO new Members Only 12"s this week?! Jamal Moss blesses us with his completely unique and maverick edits series. Muzic Box inspired sherm-warehouse-disco - no one does it better!