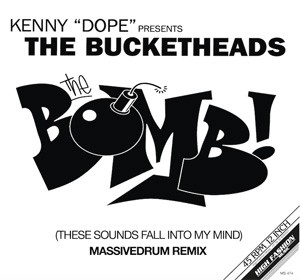 Masters at Work member Kenny Drop is the genius behind The Bucketheads – "The Bomb! (These Sounds Fall Into My Mind)". An established history of house hall of famer, "The Bomb" is a 90’s house party soundtrack essential that mixies electro, hip-hop and 4/4 house it features samples from Chicago’s "Street Player" & Green Velvet’s "The Preacher Man" fused into a disco-funk and house groove with edgy, funky, rough and ready beats and subtle Latino flavour. It easy to see why its ranked in the 100 Greatest Dance Singles of All Time! Portuguese house producer Massivedrum is on remix duties. He has remixed dance royalty from Bob Sinclar, Axwell, Mory Kantè, Alexandra Stan, DJ Chus, Kentphonik, Yolanda B Cool among many others. He lends his house sensibilities and ear for the floor to enhance "The Bomb" to new levels for an unforgettable experience. Besides the Massivedrum remix and it’s dub, also the full 14’51” minutes original version is available on this double A sided release!

Matt says: Nice update on the Kenny Dope-penned dancefloor staple. Massivedrum does exactly what he says on the tin; beefing things up to terrace-friendly house canter that's bubbly and infectious. These sounds!