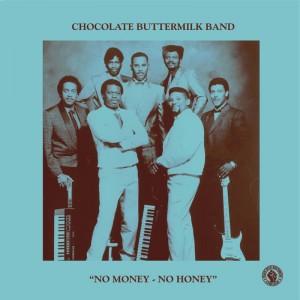 Record Label
Past Due

For almost 5 decades, The Chocolate Buttermilk Band, led by Larry Akles, has been one of the busiest and most successful cover and backing bands in the Southern United States and has been touring as the Temptations backing band for years. While they're little known outside the region, their handful of singles from the early 1980s are, for record collectors, among the best and most desirable in modern soul and boogie funk. So what happened when the pandemic hit? Larry Akles got bored and decided to get the band back in the studio to record a new joint "No Money - No Honey". He actually thought about writing this song way back when serving in Vietnam…. The result is an infectious boogie funk tune that bring us straight back to the original Chocolate Buttermilk Band classic funk sound. Massive! On the B side, just for good measure we've added "Mr. LSD", another hitter from one of the rarest of the rarest 7" from the band. This Past Due Records release comes with a full sleeve and is strictly limited to 300 copies. Don't sleep!

Millie says: In need of some fresh funky music then look no further, Chocolate Buttermilk Band providing two irresistible boogie tracks that leave you begging for more. Very limited so don't wait around on this one.