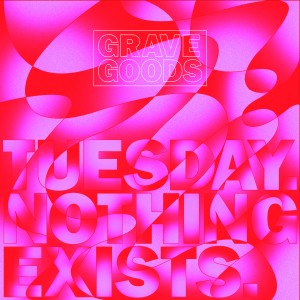 London and Dublin based women-led independent label Tulle are back with 'Tuesday. Nothing Exists' - the debut album from three-piece Grave Goods.

Featuring current and former members of PINS, Girls Names and September Girls, the Sartre-rock trio are based between Manchester, Belfast and Dublin. Taking influence from early post-punk and minimalist rock, Grave Goods music has been described as urgent and demanding, claustrophobic yet spacious - guaranteed to grab your attention. Their influences come from early post-punk and minimalist rock, and their music is visceral and angular, set against a lyrical backdrop of existential ennui.

Their first track released 'Juice' was featured on A Litany of Failures Volume III, and in December 2021 they released new single 'Phonetic Fetish'. This highly anticipated debut full-length 'Tuesday. Nothing Exists' was recorded at Invada studios, Bristol.

Side A
Come
Source
Miles
Side B
None
Story
Eneeway
Die