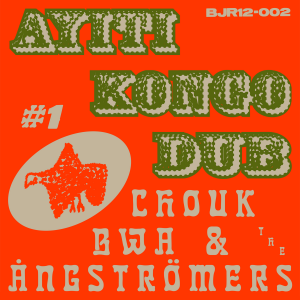 Preceding the release of a new album next year, we’re pleased to announce two ‘Ayiti Kongo Dub’ EPs by Chouk Bwa & The Ångströmers. Following on from 2020s acclaimed album Vodou Ale, Chouk Bwa turn up the heat for this exhilarating trip into their bush of ghosts by introducing a new stripped down line-up to fire up the dance floor, based exclusively on the drums and rhythms of the Haitian kongo rite and deep electronic dub expansions by their trusted Belgian counterparts The Ångströmers.

Compared to the Vodou Alé album, 'Ayiti Kongo Dub' marks a change of direction. By developing the dimension of trance rather than elaborate structures, the music now aims itself at the dance floor. The kongo style with its Mambo, Anmin and Kongo Payèt rhythms, played with two drums and based on a pulse that is not subject to a measure, lends itself very well to linear developments, with the

constant and heady cue of the fè (literally a piece of iron) hammered out by the solo singer. Developed on the basis of ceremonial pieces, not originally intended for any form of performance, the repertoire includes a significant amount of improvisation characteristic of Kongo drumming. In their production, The Ångströmers have taken to heart to respect this sense of freedom by performing a large part of their interventions in an improvised manner. The beat is almost subliminal at the beginning and gradually made more explicit by electronic intervention. Deep bass, reverbs and delays inspired by Dub: this is music for clubs and sound systems of endless nights.