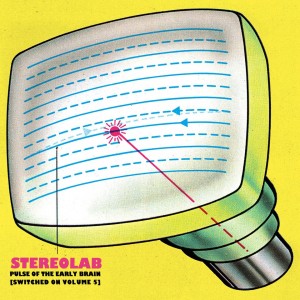 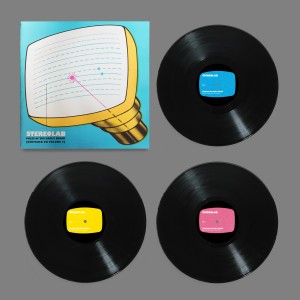 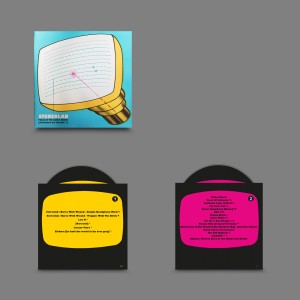 Stereolab announce the fifth in their ‘Switched On’ series of compilation albums, ‘Pulse Of The Early Brain [Switched On Volume 5]’ with the track ‘Robot Riot’.

‘Robot Riot was originally written for a sculpture made by Charles Long - an artist that Stereolab had previously collaborated with on 1995s ‘Music For The Amorphous Body Study Center’ project.

Track info:
Simple Headphone Mind’ b/w ‘Trippin’ With The Birds’ was the second collaboration between Nurse With Wound and Stereolab.
A 12” disk released on yellow vinyl [1000 copies] and black vinyl [4996 copies] The sleeve was made from a 'Mylar style’, aluminium coloured, material that was glued and sealed – each purchaser had to open the sleeve to discover which colour vinyl they had bought.
The CDs were also released in a sealed sleeve.
Originally released 28th April 1997 via Duophonic Super 45s. Catalogue numbers DS33-11 / DS45CD-11.

‘Robot Riot’ and ‘Unity Purity Occasional’ were both written for sculptures made by Charles Long - an artist that we had previously collaborated with on the ‘Music For The Amorphous Body Study Center’ project. ‘Unity Purity Occasional’ was used in 2000 for Charles' sculpture of the same name -
"Unity Purity Occasional is a sculpture with six hand-blown, tear-shaped glass cups filled with antibacterial hand gel that the visitor can pump out and disinfect their hands with. The song is channeled through three tubes that simultaneously blow the visitors’ hands dry with warm jets of air." [Text by Niki Kralli Anell].
‘Robot Riot’ is previously unreleased.

‘Symbolic Logic Of Now!’ was one side of a split 7” with Soi-Disant. 100 copies on blue vinyl and 2000 copies on black vinyl.
Originally released in 1998 by Luke Warm Music. Catalogue number LWM001.

A cover of the track ‘ABC’ by The Multitude from The Godz album ‘The Third Testament’. The track was originally recorded for a Godz tribute album called ‘Godz Is Not A Put On’ and released in an edition of 500 copies by Lissy’s Records in 1996.
The track was later released as one side of a yellow glitter 7” that was part of an exclusive Japanese box set edition of ‘Aluminum Tunes [Switched On Volume 3]’.
Yellow glitter 7” – approximately 3000 copies. Catalogue number D-UHF-D21.

‘Blaue Milch’ was recorded for a Peter Thomas Sound Orchestra compilation album – each artist on the album was sent a Peter Thomas audio track and was asked to build it into a new track.
Originally released in 1998 by the Bungalow record label. Catalogue number Bung 048.2.

The original recording of ‘Plastic Mile’. The re-recording was released as a 7” b/w ‘I Was A Sunny Rainphase’ and subsequently compiled onto Stereolab’s ‘Fab Four Suture’ album.
Previously unreleased.

‘Yes Sir! I Can Moogie’ was originally released in 1995 as part of a single sided 3 track 7” flexi-disk via Wurlitzer Jukebox. Catalogue number WJ03 - 1000 copies were pressed.

‘Refractions In The Plastic Pulse’, a track from the ‘Dots And Loops’ album remixed by Autechre.
A 12” disk released on 20th April 1998 via Duophonic UHF Disks. Catalogue number D-UHF-D19. 500 copies pressed on translucent yellow vinyl and 2972 copies on black vinyl.

‘XXXOOO’ was originally released in 1992 as part of a single sided 3 track 7” flexi-disk via the Encore! label. The flexi-disk was given away with edition #6 of the 'Tea Time' fanzine. Catalogue number Encore 001.