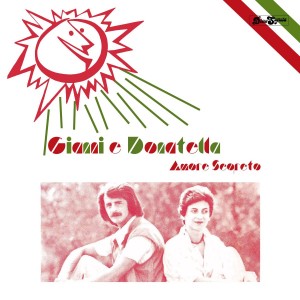 Disco Segreta reveals another music mystery! This EP -  4 years in the making - marks the first ever 12” release of the elusive downtempo Italo-boogie tune “Guarda l’Amore”, sung by the mysterious Italian duo Gianni & Donatella, only previously available on the impossibly rare 1987 “Disco Italia” compilation LP, released on the tiny Italian Disco In label.

Through the course of this excavation. Disco Segret unearthed four previously unreleased demo tracks sung by the track's author Walter Canducci along with Gianni, supposed to be part of an LP release that ultimately never saw the light of the day….until now, and guess what - they’re jaw-dropping!

Starting with the slap-bass funk bomb “Si, No”, then going into the late-night love maker “Amore Mio”, topping it all with the mellow beach vibes-infused “Come Allora”. On top of that, you’ll also get an alternate “Guarda l’Amore” demo version.

We will never know how these lo-fi demos would sound if the original project of Gianni & Donatella singing on all tracks succeeded, but the only existing recorded evidence can sure give a feel of this unique Italo-boogie studio project.  Reissue is from actual analog multitrack and stereo masters making this truly essenziale!