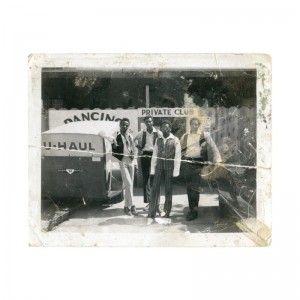 Perhaps the best Soul / Funk LP Athens of the North has ever released and you know we have high standards, not one filler and mostly unreleased tracks – Essential LP

The Up Tights were formed by Henry Bradley in Forrest City, Arkansas in March of 1967 while most of the band members were attending Lincoln High School.They took their name from the Stevie Wonder song "Uptight - Everything's Alright." Playing at school functions, they quickly branched out to playing bigger shows and headlined the 1968 St. Francis County Fair in Forrest City.

The Up Tights first recorded for Action Records in Memphis as Noble and the Up Tights. The 45 featured an original song by singer, Izear "Ike" Noble Jr. titled "Don't Worry About It."

Henry Bradley was drafted into Vietnam in 1968. He served in the 1st Squadron, 11th Armored Cavalry Regiment. While he was away, the Up Tights continued with Henry's brother, Arthur, taking over all the guitar duties. The band also hired a manager named John Mitchell. In 1968, the band met Joe Lee, who owned Variety recording studio in Jonesboro, Arkansas.

For the band's first recordings at Variety, Lee chose two originals by Noble titled "Look a Little Higher" and an updated version of "Just a Dream" which Lee released on his Alley Records label in 1968. Lee continued to record the band over the next several months. He liked to experiment in the studio and produced many versions of the group's original songs, adjusting the mix and adding elements to each unique take.

For the group's second Alley release, they appeared simply as Ike Noble on the record label. Lee brought in a local songwriter named Charles "Jamie" Holmes, who had previously written for Alley records and Joe Keene's studio in Kennett, Missouri

The resulting 45 from this collaboration was "It's Bad" backed with "That's What I Get," two Holmes originals. Another Holmes original was unreleased at the time, but available here titled "There's Gonna Be a Better Day Coming." Stax Records was interested in signing the group and wanted to re-cut "It's Bad" at their studio, but ultimately the label passed since they generally had a policy of working with Memphis based groups.

As the band grew in popularity, they began appearing with and competing with Memphis legends, the Bar-Kays. The group's biggest show in Arkansas was an opening slot at Barton Coliseum, one of the largest venues in the state, in Little Rock in mid-1969. As a result, the band was offered a spot on George Klein's "Talent Party" television show on WHBQ in Memphis in July of 1969..... Further Sleeve notes on back of the LP