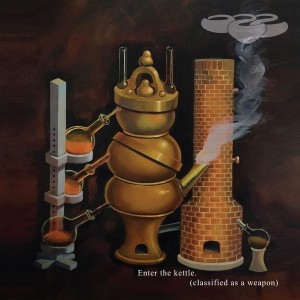 ‘Enter The Kettle’ is the second album on Alex Paterson’s new label Orbscure. It’s primarily a duo LP with him and old friend Fil Le Gonidec, who together are OSS. OSS have played at Glastonbury, Fuji Rock, supported Kraftwerk and played chess with Robbie Williams, who also stole their speed. They were originally known as Orb Sound System – a half DJ/half live version of The Orb, which could gig more nimbly than the main machine. Early shows saw reggae-heavy selections and sometimes featured toasters, but seeing as they never actually had a sound system, can’t play out at the moment and have made a record – it’s currently just OSS, which now stands for On Sum Shit. Fil went on to feature on the albums ‘FFWD’, ‘Orbus Terrarum’, ‘Bicycles & Tricycles’, ‘Orblivion’ and ‘Orbsessions Volume 1’. He has played live with The Orb many times, and also released industrial techno as Autolump on BadOrb and Mike Coles’ Malicious Damage. Other guests on the album include official-other-half-of-The Orb Michael Rendall, plus Jah Wobble, Roger Eno and George Holt – whose credits include Depeche Mode and Erasure.