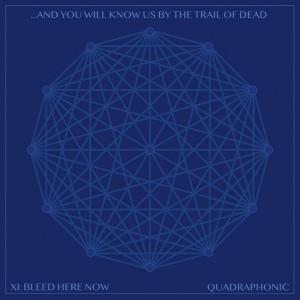 Submitted for listener’s approval, …And You Will Know Us By The Trail of Dead present their eleventh album, BLEED HERE NOW…in historic quadraphonic surround sound, giving listeners an immersive listening experience that will take them through a listening journey from one track to the next. Forced into a pandemic-necessitated cancellation of their 2020/2021 tours, the band retreated to lengthy period of doing nothing. After a lengthy period of doing nothing, the band decided to make an album in a way that hasn’t really been done since the 70s - in quadrophonic sound. From the opening bombast of “Our Epic Attempts” to the alternative drive of “Penny Candle” to the thunderous 11-minute opus “Taken By The Hand” this album is unlike anything the band has produced before, equal parts experimental and ambitious, yet still sounding honest and true to what the band is. XI: BLEED HERE NOW was produced by engineer Charles Godfrey alongside Trail’s own Conrad Keely, who also created, directed, edited and produced all of the album’s artwork again.