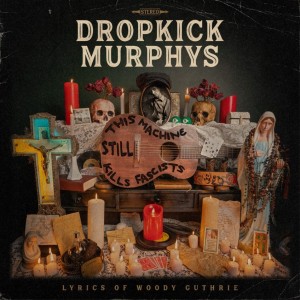 In the 10 songs that make up This Machine Still Kills Fascists, Dropkick Murphys bring Woody Guthrie’s perennial jabs at life – many of which are from the 1940s and ‘50s – into the present, with the resulting music eerily relevant to today’s world. And they’ve done it all without their usual arsenal of electric guitars. In fact, not a single amplifier was used to animate Woody’s words in these songs, but DKM harnessed all of their trademark power to bring Woody’s lyrics to life.

Dropkick Murphys founder Ken Casey explained, “The project has been a long time in the making. Nora Guthrie thought her father would’ve got a kick out of us, would’ve liked us, that we were somewhat kindred spirits so to speak, which to us was a huge honor.”

The idea for the collaboration that became This Machine Still Kills Fascists has been percolating between Woody’s daughter Nora Guthrie and the band for more than a decade, with Nora curating a collection of her father’s never-published lyrics for the band over the years. The challenge was always finding the right time to pull it together. When Dropkick Murphys co-lead vocalist Al Barr was sidelined in the latter half of 2021 – taking a leave of absence from the band to care for his ailing mother – the band was apprehensive about making a normal DKM album. The perfect time to take on the Woody project had presented itself, and the band leapt at the chance to bring more of Woody’s timeless lyrics to life with a Dropkick Murphys musical twist. The end result is This Machine Still Kills Fascists – the true fruition of like-minded rebellious artists collaborating – albeit nearly a century apart.

Woody Guthrie wrote songs from the heart and for the common person. He made a point of showing up when it counted most, often performing at fundraisers, benefits, and rallies to champion working class causes and condemn greed, war, and unchecked capitalism – all with his guitar in hand.

This is exactly where Woody Guthrie and Dropkick Murphys intersect. Dropkick Murphys’ entire ethos of family, community, service, and action depends upon honest reporting in their music. Like Woody, showing up in real life is what makes their songs so impactful. They just are who they say they are. Whether it’s standing up to Nazi thugs or standing with working men and women on a picket line, showing up is what holds the center in DKM’s world.