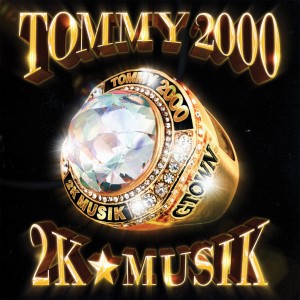 5 tracks that will travel the length and breadth of your brain; from the epic opener and lead single, ‘Whales’, to the algebraic break sequences of ‘T-2000’, Tommy’s follow up to his debut EP on DJ Haus’ Dance Trax is about as mature a sound you could expect from any artist, let alone an 18 year old just dipping his toes in the water.

‘Whales’ leads the way as an almost orchestral breakbeat builder-style track that reaches its peak gradually and really takes us for a ride as we step into the world of ‘2K Musik’. Following on from that, is the most classically-conventional track of the lot, ‘Baff’. The four to the floor backbone lulls the listener to be sucked into what is an entirely unique club track they’ve never even come close to hearing before. That is then spun on its head entirely when Tommy’s almost bookmark sound comes into play on the title track, ‘2K Musik’. Hammering us with breaks and unapologetic bass, this marriage of old school sounds with entirely dynamic arrangement and all around ingenuity tells us exactly what ‘2K Musik’ is all about.

We swap over to the B side then, without much of a break for air, and kick off with the ever-nautically themed ‘Tuna’. Totally transforming even more modern sounding breakbeat drum patterns and bending them to his will. This is an immersive exhibition into the world of Tommy 2000. The final stop on the line is ‘T-2000’. You want to stop and get off, but you can’t. Everytime you think you’ve got this track figured out, you haven’t. Snares coming crashing down and attacking the breaks just as you’ve began to comprehend the synthlines and pads that eb and flow off of each other as this crescendo takes us home and back to reality, as the needle lifts on what is only the beginning for one of dance music’s brightest stars on one of its realest labels.

Matt says: Reminds me a little of early Floating Points - twisted house-garage grooves sat atop neon synths and arrangements tight enough to strangle a cobra. Although Tommy 2000 likes to hit the accelerater a bit more! Promising stuff indeed from this rising 18 (!) year old.