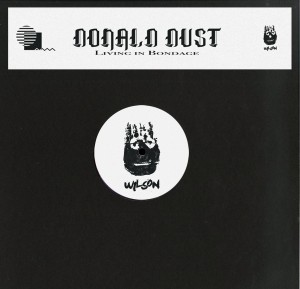 Disco mystery man Donald Dust makes his debut on Wilson Records with a wild and frenzied hi-NRG-disco-house hybrid. Sure to appeal to fans of Cyberdance, Red Laser Records, Patrick Cowley and that late 80s San Francisco sound; it also nods to fellow wonky-disco misfits The Idjut Boys and The Glimmer Twins.

Four tracks that'll work in any dance establishment that enjoys a jet propelled thrust to their electro-disco; guided by red lasers and huffs of amyl; this is peak time engine fuel for your rocket ship.

A1. Once The Needle Goes In
A2. Another Phat Planet
B1 Space Dust Moods
B2. Original Gothic Rythm Trax