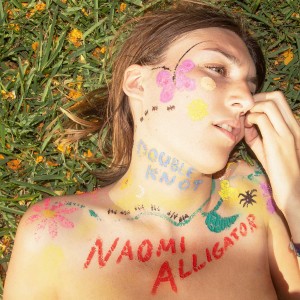 Naomi Alligator is fed up. She’s sick of trying to make relationships work that have already run their course, and tired of sitting in a wintry apartment waiting for her life to kick into gear. On her forthcoming album Double Knot via Carpark Records, the modern folk singer/songwriter from Virginia attempts to unwind her life from all that is holding her back. In a way, it’s a coming-of-age record about shedding what no longer serves you and, ultimately, finding something like deliverance.

On the opening track, “Seasick,” Naomi Alligator is already in the midst of a sort of awakening. Right off the bat, she sings, “I don’t know what’s happened to me / It’s like I turned 16 / It’s like I grew to be 6-feet tall.” This is the announcement of a wide-eyed artist coming out of hibernation and into their own. Still, Naomi’s vocals ache with guilt and longing, belying the track’s playful catchiness. Longing for what? Maybe attention from a crush, but mostly a sunnier place to call home.

Naomi Alligator began writing Double Knot while living in Philadelphia during the height of the pandemic and the deterioration of a longterm romance. “I scream: How’d the hell I end up here?
/ I’m 1-inch tall, it’s crystal clear,” she chants on “Neighborhood Freak,” returning to height and size as an emotional barometer. When asked though, Naomi rejects the notion that Double Knot is a breakup album, or autobiographical at all. Moreso, she says, it’s a personal reckoning in which, “the minute before you make a big decision, you tally up the reasons why you don’t want to do what you’re doing anymore.”

That desire to turn the page expands to the production of the album as well. Naomi Alligator generally houses her narratives in beds of minimal, home-tracked instrumentation—influenced by the stripped-down poeticism of Joan Baez and Liz Phair’s Girly-Sound tapes.