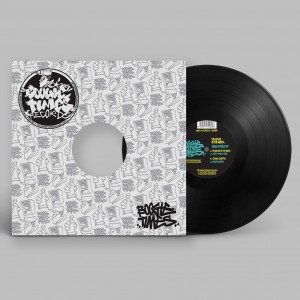 The Boogie Times label is back with 4 cuts from a very elusive artist. There has been much speculation over the years as to the identity behind the Disciples Of The Watch moniker. Sharp eared listeners have attributed the sound of the breakbeats to one artist, while others are as convinced their deductions from the sound of a bassline can attribute the production to someone else. Perhaps it’s who they think? Maybe it’s not? Possibly it’s a collective of artists?

All we can say is that Disciples Of The Watch make great music!

Back in 1992 the "Dance In Peace EP" received an incredibly limited white label run and was only available from a handful of specialist record shops. The scarcity of this release means that it has now reached near mythical status and has seen it selling for as much as £200 on the second-hand vinyl market.

This EP now gets the very long overdue full release that it deserves, with all tracks expertly remastered & cut to heavyweight black vinyl.

With very limited stock being pressed we’d urge anyone wanting to own the amazing musical journey by the elusive Disciples Of The Watch to get their orders in ASAP.

Matt says: Original hardcore label Boogie Times follow up that CRUTIAL Timebase reissue with another absolute treasure from the golden era of rave. Blows all the new stuff out the water quite frankly - there's just summat so gritty and raw in that old hardware and samplers that elbows the modern competition outta the warehouse.

A1. Disciples Of The Watch
A2. Scrap Brain Zone
B1. Losing Control
B2. Argon Matrix