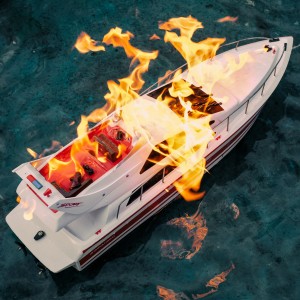 London's Moreish Idols arrived fully formed a couple of months back with the frenetic "Speedboat", their debut single for tastemakers Speedy Wunderground. Following widespread support on that track, the band return today with news of their debut EP for the label "Float" set for release on August 12th, and a brand-new single in the insistent "Hangar".

Born from humble beginnings in a Cornish coastal town, the band recently relocated to the capital, expanding scope in the process to create something that not only stands apart from their peers, but also manages that aural diversity song to song within the same set.

Created with a strictly implemented manifesto: writing solely as a group so as to allow the blending of each member's widely divergent personalities and influences. This melded a sound that combines jazz, funk, krautrock, dub and punk into something decidedly... moreish.

In January 2022, Moreish Idols laid down the four songs that would make up "Float" over an intense five-day studio session spurred on by Dan Carey. The opener, "Hangar", started life as a mistake, a chord strummed on a detuned guitar. This happy accident gradually morphed and grew into a song about feelings of disenfranchisement and boredom that comes with the inescapable nature of late capitalism.

Beginning with an intro steeped in orange-sunshine psychedelia and led by a Swarmatron chordal drone, you’re lulled by the rhythmic arpeggiating melody before the revving Scalextric guitars kick in and the song takes off. It's an eclectic, thrilling cut that shifts sounds and shape several times across its duration, even switching vocalist between Lilley's verse and Kellett's chorus, it's a genuine highlight of an EP that is full of them.

The band's own Jude Lilley had the following to say about "Float" as a whole:

"The most exciting thing for us as a band is capturing our performances live, which something Speedy is renowned for. Everything you hear in the EP is us in the room working together as unit - apart from Dylan (sax) who recorded his take across the whole EP in one! There’s something really cool about listening back to the takes and realising ‘this is what the room sounded like 5 minutes ago… and that’s us making the noise’. To us "Float" is a collage, and a demonstration of the band putting everything in the mixer and seeing what comes out (lyrics included) and it’s exactly what Dan heard before getting us involved with the label."

Produced, as ever, by the label's own aforementioned Carey, "Hangar" and "Float" showcase more of the mercurial magic that is ever-present across the Speedy Wunderground catalogue.

Laura says: Speedy Wunderground are on a real roll atm, with their recent compilation LP and The Queen's Head 7" flying out and a couple of superb forthcoming releases from Lounge Society and Joyeria due soon. Sandwiched in between these is this cracking 4 track EP from Moreish Idols. Frenetic jazz-infused art-rock, with rattling drums and chugging guitar riffs. RIYL Squid, Parquet Courts, Folly Group.